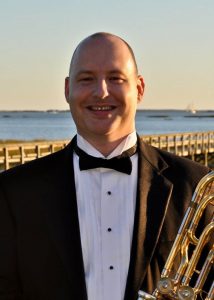 Jon Yeager grew up in a household in which his parents were supportive of whatever their children pursued, and although his father would have preferred Jon go into the medical profession, he nevertheless supported Jon in his decision to dedicate himself to music.

Growing up in southern California, Jon Yeager became very involved in his schools’ bands. He played in every band his school offered, and he served as drum major for the marching band during his junior and senior years.

He was fortunate enough during this time to cross paths with studio great George Roberts and studied with him through high school. With George, Jon learned how to play the bass trombone as an expressive solo instrument. Eventually, as Jon transitioned to college, George would invite Jon to “spell” him during his Sunday performances on Coronado island. Jon tried very hard to emulate George’s sound and style, and he recalls what he considered to be the greatest compliment he received as a developing musician when an older musician confessed that he didn’t realize it was Jon, and not George, playing a tune until he happened to look up.

Jon is a National Board Certified Teacher and teaches middle school band. He regularly reminds students of the “Rule of the Pencil”: if you miss something once, no big deal; if you miss it twice, you need to write something in your music! He cites one of the greatest teaching challenges as being figuring out how to teach band via Zoom.