By the mid-1950s, Big Bands found themselves in a changed world as Bebop took center stage. Even the Duke Ellington Orchestra, who had creatively dominated the jazz scene from the late 1920s – 1940s, found itself struggling until the historic gig at the 1956 Newport Jazz Festival. With an electrifying performance, the crowd at Freedom Park was transformed and Ellington’s career was revitalized. Sixty-four years later, your Charleston Jazz Orchestra will recreate that notable night in jazz history, one that festival producer George Wein proclaimed as “the greatest performance of Ellington’s career” and one that “stood for everything jazz had been and could be.”

“I am delighted with the eclectic and inspiring lineup of performances and guest artists for Season 12! We’ll be celebrating South Carolina jazz legend Dizzy Gillespie with the great Jon Faddis, recreating the iconic album “Ellington at Newport,” exploring Latin rhythms with Nestor Torres, bringing back the popular Jazz on Screen show, and of course capping the season off with Holiday Swing. I’m perhaps most excited about our collaboration with the Lowcountry Voices, directed by Nate Nelson, where we will be creating a completely new show celebrating the incredible Gullah musical traditions. I remain incredibly grateful for the community which supports such artistic ambitions; Charleston is the envy of the country for a reason!” 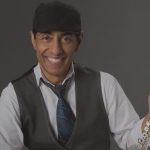