We are delighted to share our From the Archives: Art of Jazz Series Edition with you! The Art of Jazz is an annual performance series presented in collaboration between the Gibbes Museum, Charleston Jazz and 5Church Charleston. Under normal circumstances, we would all be enjoying this series together again this summer live and in person, but unfortunately, we had to postpone the series to next summer due to COVID-19. Each month, we will release a full Art of Jazz performance on Facebook and YouTube.

During the final show of the 2nd Annual Art of Jazz Series, The Absolutes saxophonist Kevin Patton and pianist Maxx Bradley debuted eight original compositions inspired by artwork on exhibit at the Gibbes Museum as part of a quartet including Fisher Wilson (bass) and Miller Boone (drums). The Absolutes are former members of the College of Charleston Jazz Combo, which is under the direction of Robert Lewis.

This series would not be possible without the support from our 2018 Art of Jazz Sponsors: Nancye B. Starnes, 5Church Charleston and Hyams Garden Center.

Presented by Charleston Jazz, the Gibbes Museum of Art and 5Church Charleston 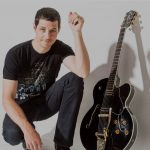